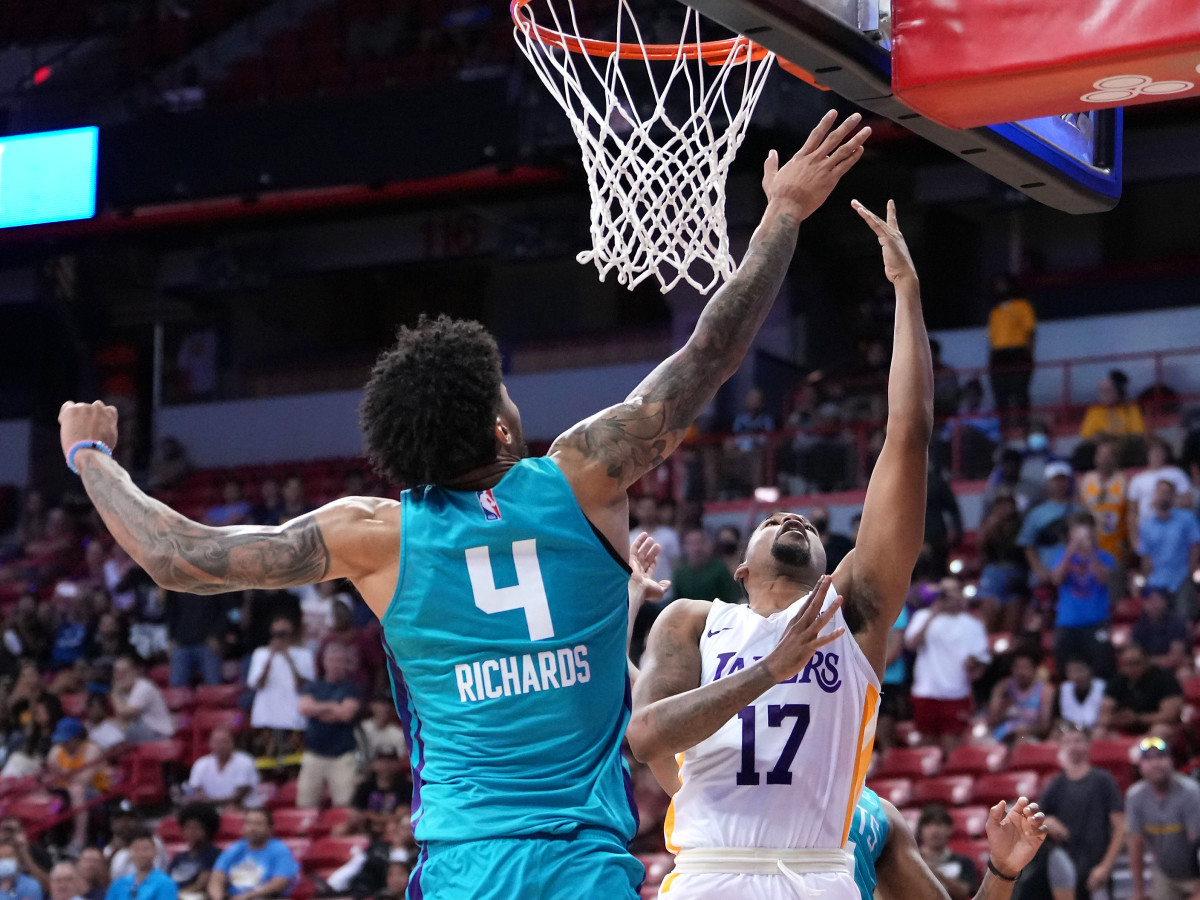 Despite playing at Kentucky and being on the Hornets since 2020, the Jamaican-born Nick Richards feels like a relative unknown to fans. Limited playing time in Charlotte and Greensboro have relegated Richards to the back of people’s minds, even more so with the drafting of Kai Jones and Mark Williams. However, in the 2022 NBA Summer League Richards had his most impressive stint (albeit 2 games) of basketball, looking much improved from his previous flashes in the G League and Summer League. Steve Clifford seems to have taken a liking to Richards saying during the SL Broadcast:

“I just love his whole approach. He’s got the right attitude, I love the way tonight he’s chasing the ball on every shot on both ends of the floor. He’s a terrific screener and he’s an excellent worker so he’s giving himself a chance to get a lot out of this”

Following Richards two games I had a chance to sit down with Nick at Summer League. I wanted to talk to him not only about his game and the new coaching staff, but also I wanted to get to know him better and share his personality with the fans. And yes… My first question to break the ice was about cricket!

JP Are you a cricket fan?

JP Who was your favorite player?

NO Chris Gayle. (Gayle is one of the most famous batsman of the modern era and a native of Jamaica)

JP Have you ever seen him play?

NO Yeah I have. I saw him play in a 20/20 match, he played in Jamaica for the West Indies (A group of Caribbean islands who play as one team). I’m a big cricket fan, definitely when I was younger, it’s harder to keep up with in the US.

JP Are there any other cricket fans on the team?

NO Nah not really… (At this point Nick asked Kai who he was sitting next to if they had cricket in Barbados in which Kai replied that they do, but he didn’t play it or have much interest in it. They subsequently got into a little side discussion about cricket and other sports in the Caribbean. Once this conversation drew to a close I moved onto some more basketball topics).

JP You’ve looked really comfortable so far, just describe your comfort level compared to your first experience in the G-League bubble. Does it feel different out there?

NO Definitely, I’ve got more clarity on this team. I’ve got more experience, I’ve been two years in the league already. I’m into my 3rd year, I’m just more comfortable.

JP Did you ask to play in this? Sometimes as a 3rd year player they “Choose” to play in SL?

NO I think it was a mutual decision. (At this point Kai interjected and shouted “He just really wanted to play with me!” They both laughed). Coach Clifford hasn’t really seen me play that much and we both came to a decision. I said I wanted to play and he said he wanted to see me play.

JP Did you hear what Steve Clifford said about you on the TV broadcast during the 1st game? (See second paragraph above)

JP He said that he really liked your approach, your ability to get up and down the court, impact both ends and really liked what he’s seen from you so far.

JP You mentioned a little bit about clarity of role, have you enjoyed being coached by Steve Clifford so far and what he’s asking you to do?

NO Definitely, I feel like he is very straight forward with what he wants.

JP And what would you describe those things to be?

JP So I noticed your 3 point shooting, you tested it out last summer league didn’t you. Is that one of the things you’re trying to maybe not focus on? Just focusing on rebounding and blocking shots.

NO I feel like the 3 pointer isn’t really part of my game. I feel like eventually it will get there, I’m not really rushing into it. Obviously, you know the way the game is going, everyone has to stretch out and everyone has to be able to guard multiple positions. But, I feel like my three point shot is going to get there but it’s not where it needs to be right now.

JP What are your plans for the rest of the summer, are you going to be back in and around Charlotte?

NO Definitely, I’m going to be mostly in Charlotte and New York, bouncing around from both states. Ill probably try and find some time to go back to Jamaica probably on the weekend, and I don’t know when yet but we will see what happens.

JP Last thing, off the court I don’t know if a lot of the fans know your interests and passions. Like off the court I was trying to find out if you liked cricket, and I couldn’t find anything?

NO Oh…I’m into A LOT of stuff, I’ve been practicing golf lessons.

JP Really? Me too. Have you got a handicap yet?

JP Are there any other golfers on the team?

NO I know the coaching staff, but… I don’t think so… and I know PJ has a set up of clubs.

NO Nah, I’ve been into golf since I was a little kid but I could never afford golf clubs, so I know I’m in the NBA and I can.

JP Any other interests?

NO Mostly I’m into car racing, formula 1 is another thing I follow.

JP Have you seen the Netflix series?

NO I watched it but I used to watch it before that.

JP Do you have a favorite driver?

NO Lewis Hamilton or Lando Norris.

JP Ah so the British guys, there you go! Well I appreciate you taking the time to talk and it was great to meet you.